Do you like reading Mythology!  Then you may enjoy reading #Awethor Keanan Brand’s short story in Awethology Light called ‘Modern Mythology.‘ 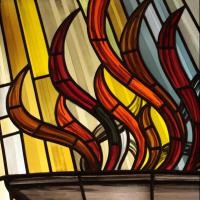 I’ve been writing since elementary school, and was predicted to publish my first book by sixteen. Thank God that didn’t happen! I had to grow up first, learn a bit more about life, before I could create characters or dialogue that didn’t sound juvenile. In my early twenties, I gave up writing for a while, when the person I was engaged to laughed at my work and said it would never be published. That later spurred me to prove that person wrong. No one but us commands our dreams.

I’d always loved stories, but it was a school assignment that first sparked the notion that I could create those stories.

“Modern Mythology” is a mashup of science fiction, fantasy, fairy tale, dystopia, and mythology, a strange mix has seen the story rejected several times—not because of the writing, but because editors or contest judges couldn’t wrap their minds around the story itself. I finally stopped trying to find a home for it, and moved on with other projects. When the Awethology was suggested, it seemed the perfect venue.

As for novels, I write epic fantasy and space opera, and am also at work on an urban fantasy. My short stories are in various genres. And then there’s poetry. I write whatever strikes my fancy.

It makes me happy to entertain readers, but I’m often surprised at what surprises them, or at what captures their imagination. (laugh) A romance writer was pulled into a non-romantic fantasy story with battle scenes she does not usually read; a jaded fantasy reader was intrigued by how old tropes were re-imagined; and an editor commented on the professional level of the writing. In the epic fantasy, the scenes readers mention most often are the non-epic ones: a soldier and a princess sharing a laugh, a sister grieving her brother, a blacksmith making a life-altering decision.I hope that means readers see the reality in the fiction.

“Modern Mythology” was born out of a difficult time when circumstances became overwhelming. I wanted to leave all the stress and trouble behind and simply rest. The main character, Jaysha, feels smothered in her life and decides to flee to the Hinterland, a mysterious wilderness outside the massive walled city. She thinks it’s her first visit, but she’s fled to the Hinterland before, and her new-found friends help her remember what happened and why.

Compared to other publishing journeys, this has been an excellent, painless experience.

Although I have edited for publishers in the past, currently I am a freelance editor, and I enjoy working with fellow writers dedicated to their craft.