What can I say about Mara Reitsma. Wonderfully creative who writes great stories and builds worlds with astounding success. Her short story ‘Forever Touched’  and Poem  are a wonderful addition to ‘Love from The Otherside’ – A Ghostly Writes Anthology. 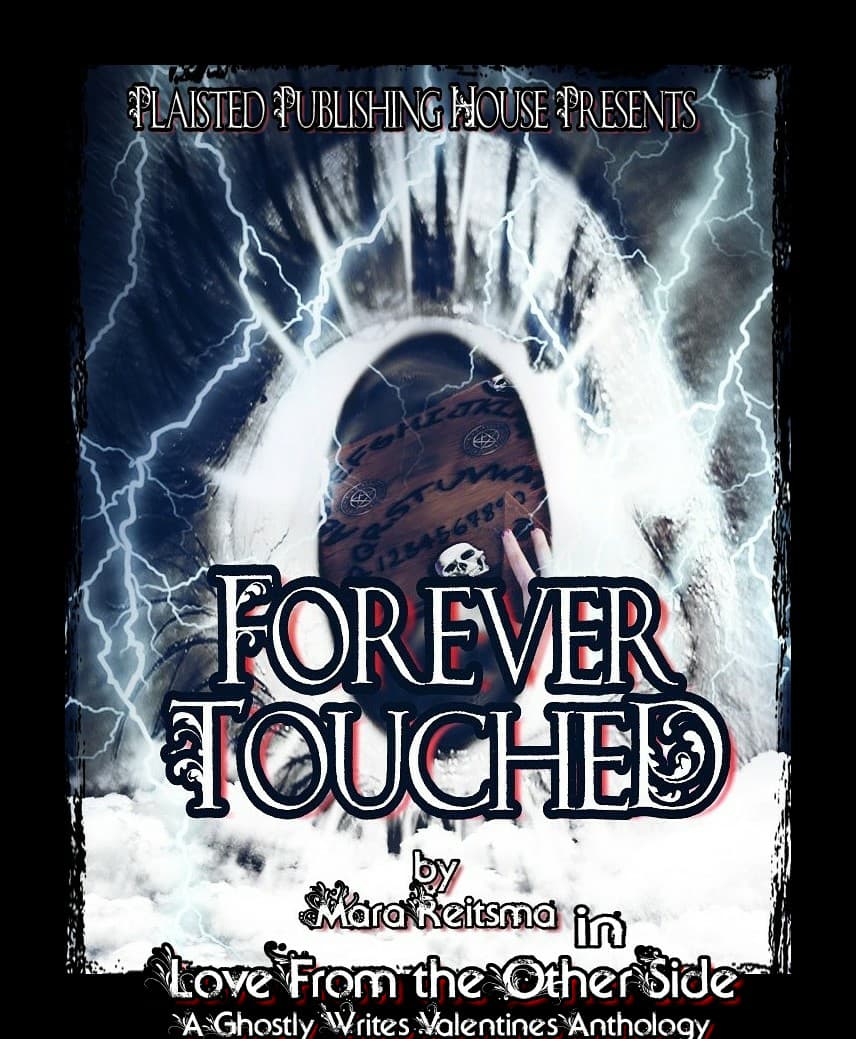 Introduce Yourself and where you’re from.

My name is Mara, and I live in Canada. No, I do not live in an Igloo, though it would be kind of cool, I live in a house, on the West Coast of British Columbia. It rains here, a lot, which gives me ample time to warm up with my laptop and finish a story or two; when I’m not enforcing a peace treaty between my three children. There is never a dull moment around here. I’m either entertaining my minions, writing, or doodling. If I stop, my head would literally explode.

Anyhow, I love to write, and so far, have managed to squeeze myself into the following anthologies ?

*Ghostly Writes Valentines Anthology: Love from the Other Side-

Tell it to The Rose & Forever Touched

* We Are The Devil’s Daughters:
Zahara, Madrina & Euphamia

Now, because writing doesn’t seem to be enough, I’ve also taken to graphic design for covers and promo art, and got a few hand-drawn coloring books out there. One for the inspirational seeker, and another for those who can’t say it at work, and should color it instead. Both, are only available at Lulu.com!

*Lewd, Crude and Totally Rude- A Folio of Foul Language
I told you, it never stops.

Tell us about your writing journey?

I’ve been writing since I was a child. Always had a story to tell, just wish I’d actually written most of them down. I have what’s called ‘Word Salad’ and it flat out means that my mind works ten times faster than my mouth can keep up. So yes, I get my merds wixed up. My fingers, however, are able to keep up, and voila; but that was only one part of the problem. The second half, was having so much information stuffed into my head, that I had to start writing it all down. If I didn’t get those stories out, I’d literally go insane; though it didn’t end with the stories; which also, don’t seem to end.

I have written novels, taken part in various anthologies, created cover and promo art, as well as dabbled with a few book trailers. My mind just doesn’t stop. So here I am, not totally bat-shit crazy, hoping someone else will enjoy my insanity with me.

What is your story about?

I have two contributions to the anthology, one short story and a poem. Un-related as of yet, but as most of my stuff has a way of finding a place in the Universe I have created with my co-author, Mark McQuillen, only time will tell.

First up, is Forever Touched. A short, sinful story with a wicked ending. Though it has yet to secure its place in our Verse, it has quite the potential, and was based on a true story, of a friend of a friend of mine. It starts off with a young man who seems to have forgotten the last few days and awakes in an elegant farmhouse surrounded by older men. As the story plays out, he starts to remember bits and pieces. He suffers from flashbacks of what he believes to be a dream, but soon enough that dream turns into a nightmare, and a game played with friends, at a party that never should have taken place, leaves the young man with a devastating future. How was he to know it would steal his soul? How was he to know how deadly the woman truly was?

My second piece is a poem called Tell it to the Rose, and bears a description of the Guild and the Petals who frequent its halls. A spicy little endeavour, made to lure you in. The Guild resides in the Verse created by Mark McQuillen and I, and is used by the Petals to covet secrets that most would have soon seen buried. With their chapterhouses located all over the Verse, the Petals seek out those lonely warriors, in hopes of trading skin for secrets. They’re sinful assassins, working their wiles with the knowledge that secrets fall during the most pleasurable moments. You can find more about them in the Sin and Secrets Series, or the Devil’s Daughters Crossover.

Why did you choose this topic/genre?

I’ve always just written what comes to mind, and with friends like mine, a lot, comes to my mind. There are always tales of intrigue or mention of a dream, and well, one thing leads to another and bam, we end up with a story. And they say I’m the crazy one, they’re the ones feeding me ideas; but in all honesty, I’ll try writing anything once, twice if I like it.

Why publish in the Ghostly Writes Anthologies?

Why not? I have stories to tell, people, how could I pass this up? It was a lot of fun, and the people at Plaisted Publishing House are super easy to work with. Professional and courteous, always working to make the anthologies even better. I’ve worked with other anthologies before, but none have been as resourceful and on the ball as Claire and her crew, always willing to help out. They are knowledgeable and informative as to what’s happening throughout the publishing process, and leave me feeling that my script is in good hands, with good people. I don’t think I could work with anyone else, they’ve set the standards too high.

Share your experiences of helping each other in the Ghostly Writes Group.

The best part of all this, was getting to know some wicked new Authors, and getting to create covers and promos to my heart’s content. But really, there are so many of us out there, doing our thing in our own way, and watching as each piece was put together to create the Ghostly Writes Anthology, it blows my mind. So many stories, so many different takes on the ghostly realm…  You guys rock, you really do, cause you love what you write, and you write what you love, and now, I get to read it all. It was a pleasure working with everyone, and I’m in for the next round!

Thank You for Participating