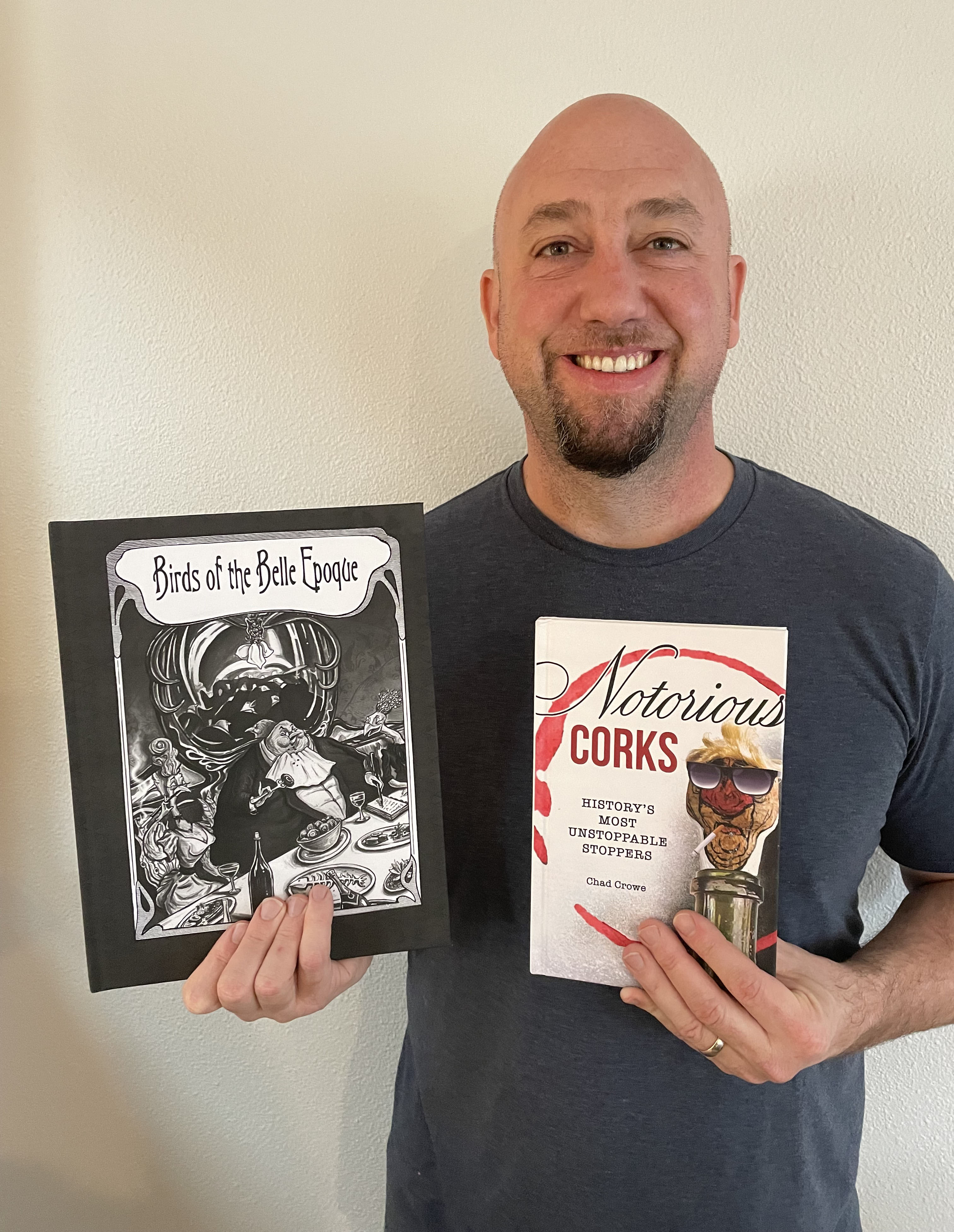 Tell us a bit about yourself!

I’m a 48-year-old man who just painted faces on 25 corks, wrote descriptions for each and made a book of them – if that isn’t frightening enough, then please read on. I have been working as an artist and illustrator since 1996, mainly for publications and news media. The more exciting aspects of my career have been drawing parade floats for the annual Carnaval de Nice in France, designing and helping to create a 10ft tall sasquatch snow sculpture in Japan, and working in New Delhi for one year as a staff artist for The Times of India. I am currently living in Portland, Oregon with my talented wife Brenda, who helps me to design these books.

At what age did you discover art?

Probably like most kids, at an early age with crayons on the walls.

What type of art did you enjoy most as a child compared to now?

I really enjoyed drawing birds when I was really little, making up different characters, and looks like that’s what I’m doing again yet again as an adult. The corks also seem like something I would have done at age 7. Apparently I have a severe case of arrested development.

Do you work as an Artist?

Yes, I’m an illustrator for news agencies and publications.

How did you get into the world of art for a job?

I pursued it at a young age, before my brain was developed enough to understand statistics and make truly logical career decisions. I admired the comic strips of Bloom County and the political cartoons of Pat Oliphant and Jeff MacNelly as a kid, and wanted to follow in their footsteps. I attended a cartooning and graphic arts school after high school, and then to university to study Political Science and Fine Art. While in college, I began freelancing for weekly publications and a few newspapers. Despite some stops and starts and a few odd jobs, it eventually became the career I have today.

What is your background?

When I was younger I wanted to be a political cartoonist at a large newspaper, so most of my education for art was focused on humorous illustration and caricature, and my college classes on politics and journalism. It was all  training for an occupation that has since largely disappeared, due to new technology and media, and falling economic support for traditional journalism. I was fortunate to take the illustration route, and have managed to keep freelance clients and not be dependent on one newspaper or client as the source of income.

Do you have qualifications or are you a natural artist?

I have qualifications of having been to art school and a BFA in Fine Art. But I don’t think the painting or drawing came naturally and had to work very hard at my very moderate level of ability. But the demented mind came naturally, which is probably the most important thing for an artist.

What role do you think an artist has in society?

There are no rules and the role is up to the artists themselves. Whether it’s happy cottages, social justice campaigns or  giant balloon dogs, it’s hard to classify what is art and depends on the viewer. I personally enjoy seeing art that surprises me, offends me or makes me laugh. But I also appreciate beauty and sentimentality too. That’s not very cool to admit these days. Don’t tell anyone.

Describe how you start a project?

Drawing and doodling usually. If it’s an assignment, obviously read the piece and brainstorm. After drawing, then pencil, and often ink and scanned in to be completed in Photoshop. The corks and the birds were all hand painted though.

Why do you draw?

What themes do you peruse?

Well, the birds and the corks were unexpected in terms of inspiration. It’s a fun challenge to combine elements that seemingly have nothing to do with each other, and create something from nothing, giving it a story or some sense of meaning that it didn’t have before. My journalism assignments usually involve politics or economics, and I will stop before you begin drooling from boredom.

How has your art changed over the years?

I am much more interested in fine art and painting than I used to be when I was younger. And less interested in caricature. Regarding my style, I don’t know, but I think it’s become a bit looser and more focused on conveying concepts than fussing over drawing details (as journalism and deadlines demand).

What type of art do you most identify with?

I think humorous or expressive art, whether it’s in fine art, illustration or comics. But I really enjoy the work of painters and graphic artists from the late 19th and early 20th Centuries. German Expressionism is also an interesting time period and cast of characters.  I also like visual journalism and travel sketchbooks. But I find inspiration from all kinds of artists and art, and also things that have nothing to do with art.

What is your favorite piece of art?

Impossible to say. But I have a real respect for David Cerny’s floating middle finger sculpture in Prague and Maurizio Cattelan’s sculptural middle finger in front of the Italian Stock Exchange building (I’m not sure which artist was first here).

Do you have any real – life inspiration for your art?

Apparently corks. Maybe that was just a mental-health spiral due to Trump and the pandemic though.

Have you ever worked outside of the art world?

I’ve been a bakery cleaner, store clerk, dishwasher, cook, barista, and busboy, but have been fortunately doing this full time since 2002 or so. I also taught Illustration part time at a local college.

What advice would you give to a new artist?

If there’s anything else you can do that’s tolerable and will pay you, do that. If you decide you absolutely have to be an artist then accept it, work very hard and don’t complain. You’ve been warned.

Is there anything you dislike about art and the art world?

Hmm. I usually like art and I generally dislike the art world.

What do you enjoy most about being an artist?

In my particular field it’s always having something new to read, learn or investigate with an assignment or project. And the connections and friendships I’ve made with people and places throughout the years. Also, I do love drawing and generating ideas, and communicating that with an audience. I think being an artist is probably just a long process of self-discovery throughout your life. Also, you have a license to be crazy, which isn’t allowed with most other occupations.

Who are your favorite artists and why?

Too many to mention and depends on the stage of life I was in. It started with Berkely Breathed’s Bloom County, then Jeff MacNelly and Pat Oliphant for their editorial cartoons. Now if I had to list more they would be Honor Daumier, Toulouse Lautrec, Ralph Steadman, Chris Riddell, Tomi Ungerer, Steve Brodner, Al Hirschfeld, Angel Boligan, Auguste Rodin, David Cerny, Maurizio Cattelan and Ronald Searle.

What is the best advice you’ve been given?

“You’re going to be an artist? Break your goddamn pencils.”

What can’t you do without as an artist? 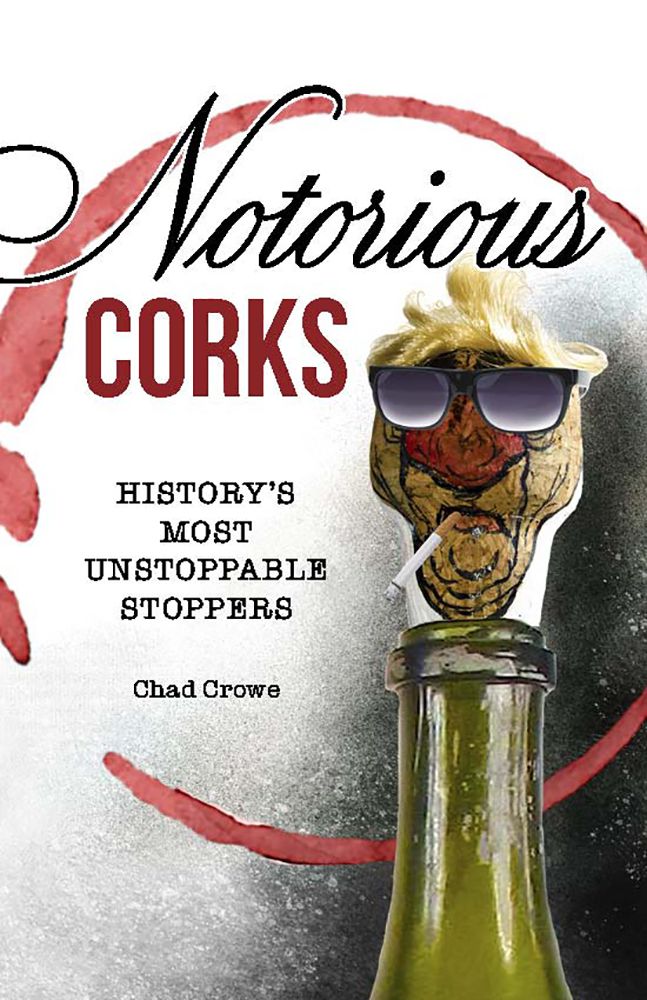 What’s your most embarrassing moment in the art world?

Maybe it’s publishing this book on corks. Have yet to see.

Do you have any memorable responses to your art?

Quite a few responses over the years, but what stands out is an angry man from Idaho and his expletive-laden threats after reading my booklet “Curious George W.”

Do you have a dream project and if so, what is it?

I’ve been fortunate to have so many wonderful experiences, and the Nice Carnaval would have been my favorite project over the past 15 years. I enjoy traveling and learning about other cultures, so perhaps a community project with artists and  children in another country.

Have you ever made a coffee table book before?

No. Just the “Curious George W.”  booklet, which I don’t think would qualify as a coffee table book.

What brought you in this direction?

It wasn’t well planned. I already had the bird book put together from years ago. The cork book was probably due to Donald Trump and pandemic-related trauma. Like Colonel Kurtz in “Apocalypse Now,” but painting on corks instead of cave walls.

Do you research your projects?

Maybe a little too much given the absurd subject matter.

“Chad Crowe is an artist who draws, writes and refuses to grow up. He has designed over twenty parade floats for the Carnaval de Nice in France, sculpted a giant snow sasquatch in Japan, and braved gladiatorial traffic and angry monkeys in his commutes as a staff artist for The Times of India. His more formal resume involves working as an illustrator for such publications as The Washington Post, The Wall Street Journal, American Lawyer and other media. He lives in Portland, Oregon, with his amazingly talented wife and enjoys wine, books and travel. He doesn’t like pandemics. You can see more of his work at www.chadcrowe.com.”

Patrick McNerthney
5.0 out of 5 stars Hilarious ride through world history. Plus some cool, glammed up corks.

Reviewed in the United States on 1 October 2021

Verified Purchase
I bought this book because as far as I can tell no one has ever written and illustrated literature that celebrates the mighty cork. The illustrations are arresting, vibrant, and idiosyncratic. The stories remind me everything I forgot about world history, the players and events. Plus I’ll look cool for leaving this on my coffee table when friends come over.